Sheffield Hallam’s men’s volleyball 1′s travel to Camerino in Italy later this month hoping to be crowned champions of Europe. The European Universities Sport Association (EUSA) take place from the 19th to 26th July and Hallam are one of fourteen teams competing. Universities from Armenia, Croatia, France, Germany, Italy,  Norway, Poland, Portugal, Romania, Spain and Turkey are all present whilst Hallam are the sole representatives of the United Kingdom.

The competition was last held in 2013 when the Technical University of Munich took the title. Hallam competed that year but since then have been crowned champions of BUCS twice, in 2013/2014 and 2014/2015. They beat Northumbria 3-2 in 2014 to take the crown for the first time and last year, they defeated Bournemouth 3-1 to keep their title for another year.

Despite this success, captain Alex Jenkins was quick to cool any talk of Hallam taking the European crown. He told SHUlife Sport: “We are just looking to compete and play well as a team, we are missing a few crucial players so some of the younger guys will be relied on more heavily. This will be a great learning opportunity for everyone! Hopefully we can perform well and get some results”.

One man who has been crucial in the recent volleyball success at Hallam is their coach, Keith Trenam. His influence has been so great that the players have created their own hashtag for him, with #VivaLaTrenam regularly accompanying their tweets. Keith told us that the competition could provide a great platform for the players saying, “This is a great opportunity for the players to play against high level teams and help them to progress their game and showcase themselves for future pro contracts.”

The draw for the competition will be made once the teams arrive in Italy.

We at SHUlife Sport are delighted to be accompanying Hallam and will be reporting on their every step so make sure you stay tuned to our Facebook, Twitter and Instagram pages, as well as our Snapchat, for all the very latest. 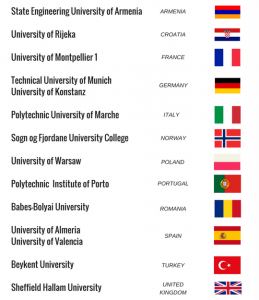 SHUlife Sport editor, 2014-2015. 3rd year English student. If you have any enquiries or any stories you'd like us to cover, then feel free to get in touch! @tnekmail [email protected]

Written by Jess Peace   Festival season is finally upon us. Taking over the city once again, Tramlines is a music festival that offers some [...]

It’s nearly time – Queen will be releasing their highly [...]